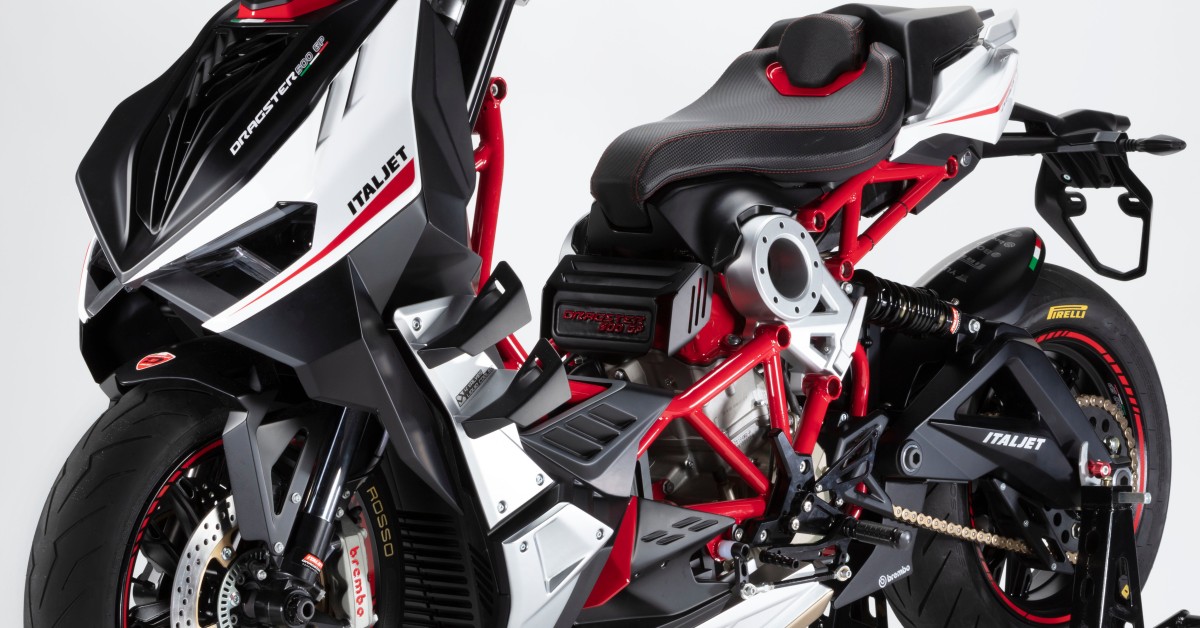 EICMA 2022
ITALJET PRESENTS DRAGSTER 500GP: THE CONCEPT THAT REVOLUTIONISES THE WORLD OF 2 WHEELS BEYOND THE IMAGINABLE!

and the final version of the DRAGSTER#e01 Electric, the zero-emission model in the range

• At EICMA 2022, world premiere of the DRAGSTER 500 GP concept, a "unicum" in the motorcycle scene, which gives life to a new category of two wheels, the URBAN GEARED
• DRAGSTER 500GP is equipped with a single-cylinder 4-stroke engine with double shaft distribution and 4-valve liquid-cooled and is distinguished by a transmission with 6-speed gearbox
• The introduction of the standard DRAGSTER#e01 Electric, with a 12kW peak power electric motor, is scheduled for the second half of 2023
• Also on display at the Italjet stand is DRAGSTER 200 in the Malossi version: the scooter with dedicated livery that will take part in the Malossi Academy next year
• DRAGSTER 125 e 200: to date, 7000 units sold in Europe and South-East Asia markets
• In 2023, the DRAGSTER 125 and 200 will arrive in many new markets, including the USA

Italjet is still accelerating innovation. At the International Two-wheeler Exhibition (EICMA), we present the world preview concept of the new DRAGSTER 500GP, a “unicum” in the motorcycle scene, which marks a real revolution in the world of two wheels. the DRAGSTER 500GP, with which Italjet definitively raises the bar, creating a masterpiece of technology, design and perfection.
A vehicle never seen before that is destined to change the history of the motorcycle world.

DRAGSTER 500GP, which enriches the range made up of DRAGSTER 125 and 200, is a hyper sport vehicle that gives the power of a real motorcycle with the lightness and agility of a hyperscooter and gives life to a new category of vehicle, the URBAN GEARED.

Characterized by the typical trellis frame that distinguishes Italjet scooters, DRAGSTER 500GP is equipped with a liquid-cooled 4-stroke single-cylinder 4-stroke engine with twin-shaft and 4-valve distribution that expresses 43 HP (32 kW) at 8,000 rpm and a maximum torque of 43 Nm at 6,000 rpm.

The transmission, another absolute innovation, combines a 6-speed gearbox (never seen before in such a vehicle) with a multi-plate wet clutch. Electronic injection, electric start and two-way underbody exhaust, worthy of a superbike, complete the mechanical package of the new DRAGSTER 500GP.
The concept, conceived and developed at the Italjet Style Center in Castel Guelfo di Bologna, anticipates the production of DRAGSTER 500GP, which will be produced in Italy and introduced on the market starting in 2024.

At EICMA, ITALJET also brings the final version of DRAGSTER # e01 Electric, the zero-emission model of the range, with an electric motor of 12 kW of peak power and 6 kW of nominal power. Due for release in the second half of 2023.

The Malossi version of DRAGSTER 200 is also exhibited at the Italjet stand. Italjet has signed an agreement with the Malossi academy, where we will provide 10 DRAGSTER 200s to the participants of the Malossi racing academy that teaches children aged 14 to 24 all the secrets of the track involving pilotes in dedicated race championships.

In the meantime, the marketing of the DRAGSTER 125 and 200 continues with enormous success. The Urban SuperBikes from Italjet are getting an excellent response all over the world. To date, the number of DRAGSTER 125 and 200 sold worldwide is 7000 vehicles, equally divided between Europe and the South. - East Asia.

Following the huge demand from overseas, the DRAGSTER 125 and 200 will also land in the USA by the end of 2023.

"Once again, we have achieved our goal: to create a vehicle that did not exist. For DRAGSTER 500GP we were inspired by the world of sports bikes. We wanted to create a vehicle capable of combining the fun you feel riding a motorcycle with the lightness and agility of a scooter. DRAGSTER 500GP marks a new chapter in the history of two-wheelers and confirms us again as a brand that anticipates trends” comments Massimo Tartarini, President and CEO of Italjet Spa "At EICMA we are also pleased to present the final version of DRAGSTER # e01 Electric, the green model for those who want to focus on an electric choice, without renouncing to drive an unconventional, daring and innovative vehicle ".

1. Concept DRAGSTER 500GP: change the history of two wheels. A new category of motor vehicle is born, the URBAN GEARED

DRAGSTER 500GP represents a "unicum" in the motorcycle scene and marks a real revolution in the world of two wheels. A proudly recognizable concept for the family feeling that unites the DRAGSTERs, with which Italjet definitively raises the bar, creating a masterpiece of technology, design and perfection.

Inspired by the world of hyper sport bikes, DRAGSTER 500GP was in fact conceived to combine the fun you feel riding a motorcycle with the lightness and agility of a hyperscooter.

A vehicle never seen before, to make your head spin, destined to change the history of the motorcycle world and which once again confirms Italjet as a "counter-current" brand which challenges conventions, anticipates the future and creates solutions up to now, unimaginable.

Displacement, power and torque are growing: Italjet Dragster declines the winning formula of the most motorcycling scooter in an even more muscular key.

The engine is a liquid-cooled 4-stroke single-cylinder with a twin-shaft and 4-valve distribution that delivers 43 HP (32 kW) at 8,000 rpm and a maximum torque of 43 Nm at 6,000 rpm. The transmission, another absolute novelty, is made with a 6-speed gearbox with a multi-plate clutch in an oil bath. Electronic injection, electric start and two-way underbody exhaust complete the technical package of the new DRAGSTER 500GP.

On the chassis front, the components are first-rate, starting with the trellis frame completed by an Upside-down fork with 47 mm stanchions and, at the rear, a double hydropneumatic shock absorber with adjustable load spring. The braking department has two front discs with a diameter of 270 mm and a rear disc with a diameter of 230 mm. BREMBO calipers and equipped with an ABS system.

At EICMA, Italjet also brings the final prototype of DRAGSTER # e01 Electric, the zero-emission version of the range. Already anticipated last year at the Salone, the marketing of DRAGSTER # e01 Electric is expected in the second half of 2023.
The 'zero emissions' version adopts an electric motor with 12 kW of peak power and 6 kW of nominal power, 360 Nm of maximum torque at the wheel.
The battery, with a maximum capacity of 4.91 kWh, guarantees a range of 180 km in the urban cycle (90 km extra-urban and 150 km in the NEDC cycle). Charging times range from 4.0 hours (95%) to 5.5 hours (100%) with standard 1.0 kW charging power and drop to 36 minutes (100%) or 30 minutes (95%) in case fast charging (10 kW).
The trellis frame combined with the independent steering system (S.I.S.) gives the vehicle flexibility, strength and driving safety.
The hydraulic disc brakes - front with 200mm diameter and rear with 190mm diameter - featuring BREMBO calipers, enhance safety in sporty driving.
The wheels have different diameters: PIRELLI tire 120 / 70-12 "at the front, 140-60-13" at the rear.


ENGINE
Type Electric
Power Pack i-Ion Intelligent, 4,91 kWh
Range 180km city, 90km Highway, 150km NEDC
Power 6 kW nominal, 12kW peak @5000RPM
Torque 360Nm
Charge Timestd. 5,5 hours 100%, 4 hours 95%
Charge Fast 0.6 hours 100%, 0,5 hours 95%
Chargerstd / Fast 1 kW / 10 kW integrated
Trasmission ATC System + Belt
Other Traction Control / Smart App
CICLISTICA
Front Suspension I.S.S. single-arm and hydro-pneumatic adjustable shock absorber
RearSuspension Single hydro-pneumatic adjustable shockabsorber
Brakes ABS – (Anti-lock Braking System) Front hydraulic disc brake 200mm: Rear hydraulic disc brake190mm, BREMBO Calipers
Tires PIRELLIFront 120-70-12'' Rear 140-60-13''
DIMENSIONI E PESIDIMENSIONI E PESI
Wheelbase 1350 mm
Lenght 1890 mm
Width 750 mm
Seat Height 770 mm
Dry Weight 150 kg
Italjet is one of the two Italian entrepreneurial realities in the world of two wheels that has kept the same ownership throughout its history. The Tartarini family has been leading the company for 60 years with the same enthusiasm, courage and passion that have made Italjet a brand capable of setting trends.
Italjet is synonymous with passion for the world of two wheels. The Bolognese brand was born in 1959 thanks to the entrepreneurial spirit of Leopoldo Tartarini, a well-known motorcycle rider of the 1950s, protagonist of great sports feats among which the victory in the Milan-Taranto in 1953, three world records with the Cyclecar in Monza in 1969 and the incredible feat of traveling around the world in 13 months, between 1957 and '58, crossing five continents and 42 countries.
An eclectic and farsighted character, Tartarini motorcycles have always represented the common thread of life. As well as passion and ingenuity have always distinguished Italjet.
The company has created more than 150 different models, resulting from creativity and technological research and all are capable of anticipating the times. The definitive consecration of the brand as a reference for style and innovation took place on February 14, 1980 when the design sector of the Museum of Modern Art in New York, the prestigious MoMA decided to exhibit in its permanent collection Italjet Pack 2, the only motorized two-wheeled vehicle housed in the exhibition area. In 1998 the Guggenheim Museum in New York exhibited the liquid-cooled Italjet Formula 50 scooter, already named scooter of the year four times, in Germany, Spain and twice in Italy, in the exhibition entitled "The Art of the Motorcycle".
After having enjoyed enormous success in Italy and North America, in 2000 also, Velocifero, the Italjet scooter that perfectly blends vintage 60s style with modern technology, was named "The Best Product of 2000" by the American magazine Business Week.
Italjet today represents Italian excellence with a glorious past, whose models have been sold in 48 countries worldwide.

Today the company sees Massimo, Leopoldo's son, at the helm, who is also committed to proposing new models to make Italjet a protagonist on the international scene again. Massimo Tartarini is joined by a highly qualified, dynamic and proud work team to be part of a company with such a significant history and identity. 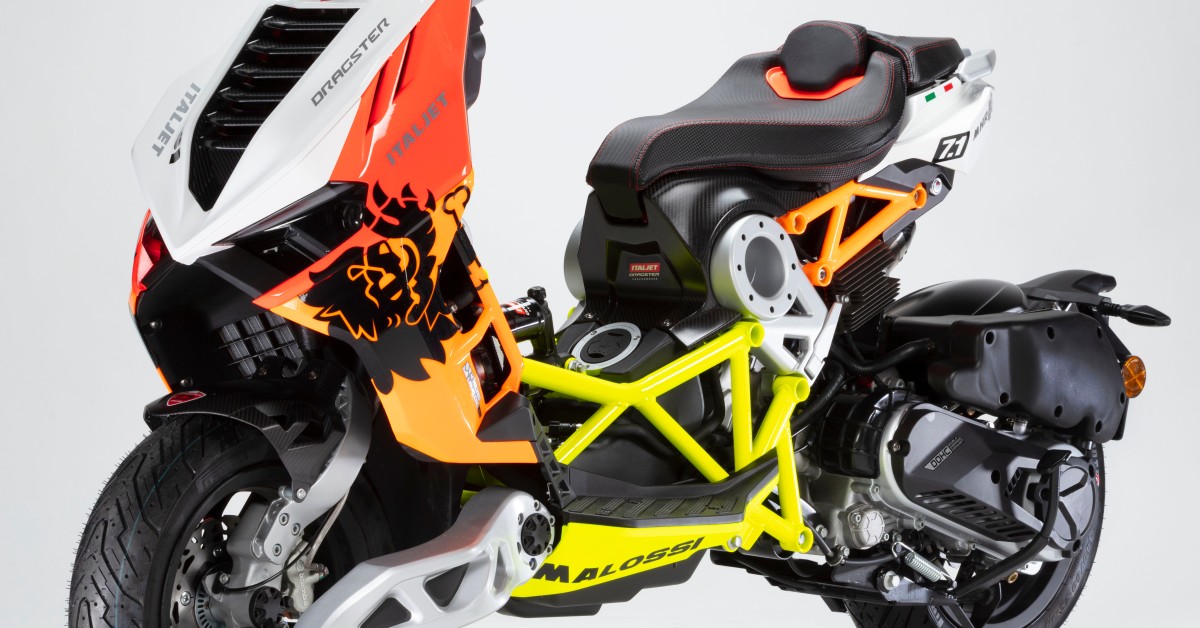 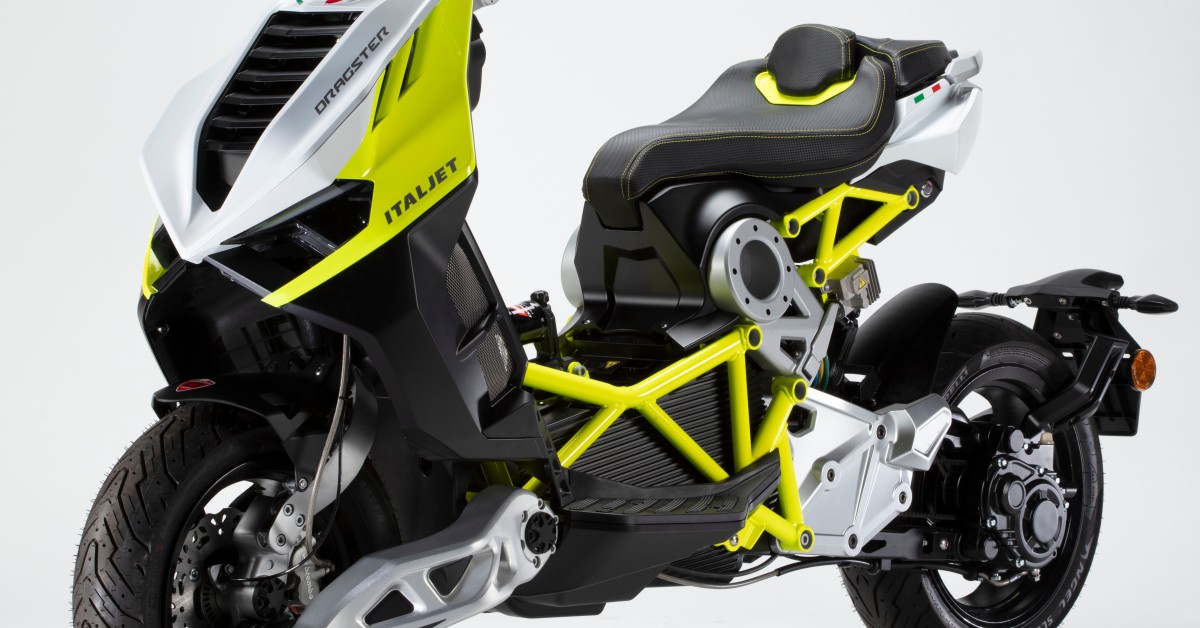